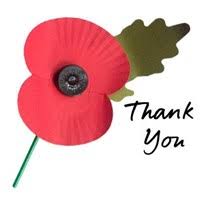 This year as we commemorate the 75th Anniversary of the D.Day Landings ‘Operation Overlord’ and codenamed ‘Operation Neptune’. This was the largest seaborne invasion in history, which began the liberation of German occupied France (and later Western Europe) from Nazi control, and laid the foundation of the Allied victory on the Western Front. With the 80th Anniversary of the beginning of the 2nd World War, our remembrance of the 2nd World War continues to be very poignant.

This year Remembrance Sunday falls on the 10th November, with Armistice Day on Monday the 11th.

Although the work of the Royal British Legion continues through the year supporting our armed services, late October, early November is probably our busiest time with the main ‘Poppy Appeal’ starting around the 26th October. This year in Forest Row, as last year we have decided not to do a house to house collection. Instead, as always, poppies, crosses etc. will be available in all the shops and other outlets and there will be three street collections on Saturdays 26th October, 2nd and 9th November. If you are able to help with this, I am sure Carolyn Aitken on 01342 823611 or Susie Kemp on 01342 822784 will be pleased to hear from you.

As part of the ‘Poppy Appeal’, there will be a Recital in Holy Trinity Church on Saturday 2nd November at 2.00pm. Soloists will include harpist Margaret Watson, along with organist / pianist Simon Morris. I  I know those who have attended in the past, will know you are in for a very enjoyable occasion. The afternoon slot has been extremely popular in recent years, so we are hoping for a good audience again.

On Saturday 9th November, ‘Poppy Day’, the R.B.L. have their annual coffee morning in the Peter Griffits Hall from 10-12noon. This will include a cake and produce stall. Do pop in for a chat and support the appeal in the process.

Remembrance Sunday falls on the 10th November. Our service as always, takes place at Holy Trinity Church. We begin with the wreath laying at the War Memorial starting at 10.30am, followed by the service in Church. We encourage everyone to attend, especially as we remember all those who have died in conflict, looking back particularly at the 1st and 2nd World War as well as in recent times.

The R.B.L. is always looking for new members. You don’t have to be ex-service, just be prepared to support our servicemen and their families and all the Royal British Legion does to help them, in so many different ways. If you are interested, please contact our Membership Secretary Jane Wogan on 01342 825382