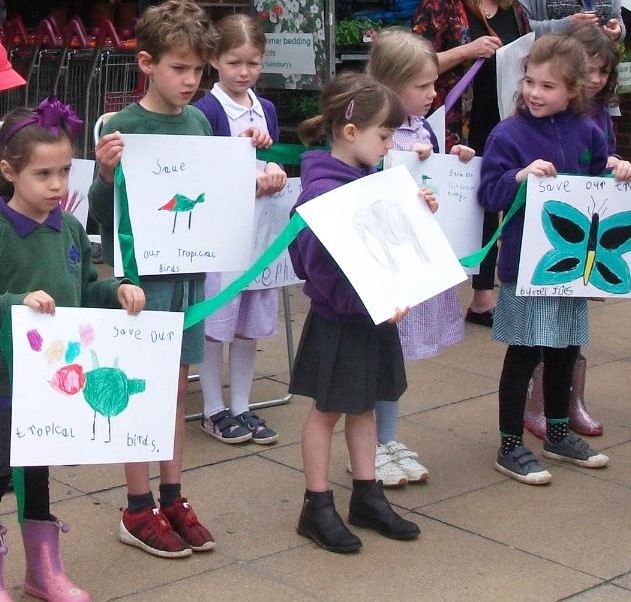 On Wednesday 26th June, over 40 Trefoil Montessori Farm school, staff and children stood outside the East Grinstead Sainsbury’s store protesting the use of Palm Oil in products the store stocks. They are all concerned about Palm Oil in so many foods and were asking Sainsbury’s to help push to find a sustainable alternative. Preferably British grown.

The children held signs and pictures they had made. Each child was moved and saddened by the practises of removing animal habitats in order to produce palm oil which is in so much of our food. They sang their version of Mad World.

They asked the public to sign a petition urging Sainsbury’s to think more carefully about the products it sells, switching to sustainable Palm Oil products would really help. The public responded very well and we would like to thank all those who signed the petition. They got 185 signatures and could have easily got more.

They have written directly to Mike Coupe, the CEO of Sainsbury’s, with their petition and to see how they feel about this issue.

They are hoping to have a response from Sainsbury’s.

8 things to know about Palm Oil

It’s an edible vegetable oil that comes from the fruit of oil palm trees, the scientific name is Elaeis guineensis. Two types of oil can be produced; crude palm oil comes from squeezing the fleshy fruit, and palm kernel oil which comes from crushing the kernel, or the stone in the middle of the fruit. Oil palm trees are native to Africa but were brought to South-East Asia just over 100 years ago as an ornamental tree crop. Now, Indonesia and Malaysia make up over 85% of global supply but there are 42 other countries that also produce palm oil.

Palm oil is in nearly everything – it’s in close to 50% of the packaged products we find in supermarkets, everything from pizza, doughnuts and chocolate, to deodorant, shampoo, toothpaste and lipstick. It’s also used in animal feed and as a biofuel in many parts of the world (not in the UK though!).

3. WHY IS PALM OIL EVERYWHERE?

Palm oil is an extremely versatile oil that has many different properties and functions which makes it so useful and so widely used. It is semi-solid at room temperature so can keep spreads spreadable; it is resistant to oxidation and so can give products a longer shelf-life; it’s stable at high temperatures and so helps to give fried products a crispy and crunchy texture; it’s also odourless and colourless so doesn’t alter the look or smell of food products. In Asian and African countries, palm oil is used widely as a cooking oil, just like we might use sunflower or olive oil here.

4. WHAT IS THE PROBLEM WITH PALM OIL?

Palm oil has been and continues to be a major driver of deforestation of some of the world’s most biodiverse forests, destroying the habitat of already endangered species like the Orangutan, pygmy elephant and Sumatran rhino. This forest loss coupled with conversion of carbon rich peat soils are throwing out millions of tonnes of greenhouse gases into the atmosphere and contributing to climate change. There also remains some exploitation of workers and child labour. These are serious issues that the whole palm oil sector needs to step up to address because it doesn’t have to be this way.

5. WHAT SOLUTIONS ARE THERE?

Palm oil can be produced more sustainably and things can change. The Roundtable of Sustainable Palm Oil or RSPO was formed in 2004 in response to increasing concerns about the impacts palm oil was having on the environment and on society. The RSPO has a production standard that sets best practices producing and sourcing palm oil, and it has the buy-in of most of the global industry. As well as committing to buy and use RSPO certified palm oil across their operations globally, we encourage companies to be transparent in their use and sourcing of palm oil ensuring they know who they are buying from and where it’s been produced, and to invest in and support smallholder programmes and sustainable landscape initiatives. Only with all of these ingredients can we start to accelerate the shift to a mainstream sustainable palm oil industry.

6. WHY DON’T WE JUST SWITCH TO AN ALTERNATIVE VEGETABLE OIL?

Palm oil is an incredibly efficient crop, producing more oil per land area than any other equivalent vegetable oil crop. Globally, palm oil supplies 35% of the world’s vegetable oil demand on just 10% of the land. To get the same amount of alternative oils like soybean or coconut oil you would need anything between 4 and 10 times more land, which would just shift the problem to other parts of the world and threaten other habitats and species. Furthermore, palm oil is an important crop for the GDP of emerging economies and there are millions of smallholder farmers who depend on producing palm oil for their livelihood. Boycotting palm oil is not always the answer, but demanding more action to tackle the issues and go further and faster, is.

7. CAN I TRUST RSPO CERTIFIED PRODUCTS?

RSPO represents the largest, independent, third-party standard for the more sustainable production of palm oil. Certified palm oil protects the environment and the local communities who depend on it for their livelihoods, so that palm oil can continue to play a key role in food security. Along with other organisations, we play an active role in influencing and shaping the RSPO standard to make sure it puts in place more safeguards for people and the planet. In November 2018 the RSPO standard was strengthened and it now represents an essential tool that can help companies achieve their

commitments to palm oil that is free of deforestation, expansion on

peat, exploitation and the use

In 2012 the UK Government recognised that we were part of the palm oil problem and could also be part of the solution. They set a commitment for 100% of the palm oil used in the UK to be from sustainable sources that don’t harm nature or people. In 2016 75% of the total palm oil imports to the UK were sustainable. This is great progress but there is more to be done to get to 100%.