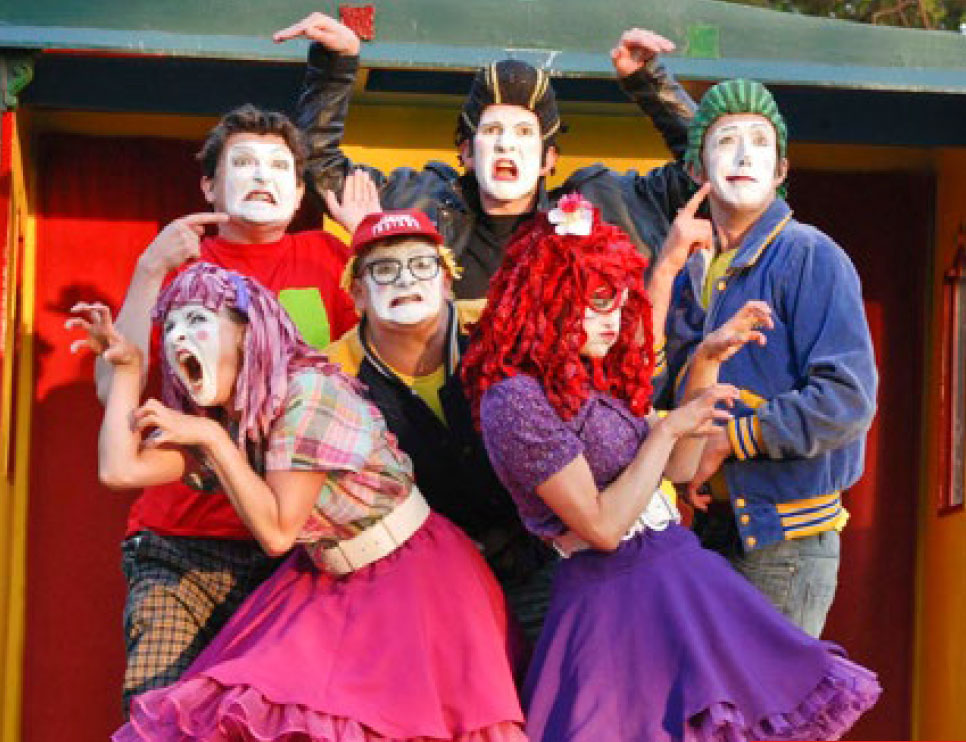 The Rude Mechanicals Theatre Company are back this Summer!

Summer is almost here! The days are getting longer and warmer and very soon it will be time for The Rudes to go on the road again. It will be our twentyfirst outdoor tour to villages and towns across Southern England and on 3rd August, we will be performing in Hartfield. The play will be ‘Ikarus Inc’,our story about what it takes to achieve YOUR dream. We toured it first in 2010 and it has proved to be one of your favourites. With both the UK and America in turmoil politically revisiting this story of hopes and dreams – set in the 1950’s in the fictitious Indiana town of Dreamville – is very timely. We kick off on Saturday 1st June and will tour to fifty-two venues.

The story: It’s the little mid-West town of Dreamville, Indiana, in the 1950’s and a commercial traveler called Daedalus Gildersleeves comes into town selling dreams from his suitcase. He begins banging on doors and calling, ‘Yo’ dreams are just a place! We’ll take you there at Ikarus inc! Purveyors of fine dreams.’ The factory workers from Costello’s Automobile Corporation, who spend all day on the assembly line, come flooding out to see what all the fuss is about. With Daedalus is his pasty-faced son, Ikarus who singsthat they should stop chasing crows, but rather fly like the birds to their dreams. What they hope for is just a place and if they buy a ticket Daedalus and Ikarus will meet them at the top of a high place and fly withthem there. The mayor of Dreamville, Earl Brewster, issceptical. But out of Daedalus’ case comes flying the objects of their dreams, a fast car, a fishing pole and for Earl, the governorship of the state or even The White House. The workers are convinced and start buying the tickets.

Ikarus begins to meet the kids of the town; he is ‘real strange’ they think, but they are drawn by him and he takes them to his and his father’s apartment and they see the wings. Sandra, the mayor’s daughter, thinks Ikarus may have taken a little blue pill and tries to explain to him the difference between the stories she has read in her book, ‘Bulfinch’s Mythology’, and real life. One is just stories; the other is real life, and he needs to know the difference. But he insists he can fly.

In the meantime, Janet Brewster, the mayor’s wife, and her friend Carmine, decide to enter a competition to bake the biggest pumpkin pie in the county in order to feed the ‘sufferin’ poor’, such as Jonah and Meryl Avery and their ten children. Earl takes some convincing at first but decides it would be a good ticket – the relief of the suffering poor – for him to campaign on to be the Governor of Indiana. So, he buys one of Daedalus’ tickets and decides he will fly to his dream. Jonah’s dream is to have shoes for his children and a little farm where he can be selfsufficient, so he buys a ticket too, and so do Carmine and her husband Hank, and so does Lola, and other folk of the town.

For Ol’ Mercy Coffin it is just the devil tempting them. But will they fly and achieve their dreams or come crashing down to the cold hard earth? Will the pumpkin pie get baked?

Will they win the competition? Hilarious, romantic, tender, searching… and laced with rock’n’roll Tickets can be purchased through our website www. therudemechanicaltheatre.co.uk