The Rudes are coming back! 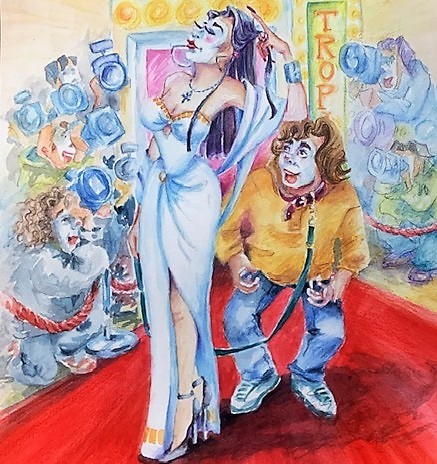 The very popular Rude Mechanical Theatre Company will be back in Hartfield on Sunday 5th June with a brand-new outdoor play on The Croft. Always good for a laugh, great live music and a bit of provocation, you won’t want to miss them. Their new play is called ‘Gods and Dogs’ and is an hilarious allegory about love, marriage and celebrity in 2084. Will the world really be like this?

This new comic dystopian allegory is set in 2084 on the fictitious island of Abatina in a world where people are either glamorous celebrities or slobbering dog-like followers of them gripped to their ‘telepafones’ – with the exception of the Nevnops (Not Very Nice People) as the President, Big Al, calls them.

The story follows Tina who enters ‘Marriage Maker’, a ‘telepavision’ game show. The idea of the game is if you win you get to marry the super-glamorous footballer, Harry Best, on the Saturday, have a weekend of love, then divorce him on the Monday. ‘All the fun and no ties!’ as the compère, Rich Nobb, puts it.

Unfortunately, Tina makes the mistake of falling in love when she wins and doesn’t want to divorce. Doreen, her best friend, has her own opinion, but then she might be a Nevnop and the Mind Police might get to her first and send her to the wolves on the ‘Other Side’ – a dangerous world over ‘the mountain’ where the inhabitants of Abatina, according to Big Al, must not go, with dangerous free-thinkers & wolves that might get them.

Unlike in Orwell’s ‘1984’ the dystopia isn’t just about keeping to the ‘party line’, but a world where people’s minds are controlled by a trashy Donald Trump kind of reality where love is reduced to a game show and marriage a mere ritual convenience and about a lack of independent thinking, a kind
of ‘group mind’ controlled by ‘faceless overseers’ through an all-consuming social media. It is very funny but also provocative. We want people to have a good laugh as they recognize things and watch the way characters morph into slobbering dogs, but we also want them to think about what love and marriage really are, and about the way the perception of women especially, but men too, can be warped into this kind of caricatured, crass or ‘canned’ conception of reality.

Will Tina get Harry to love her? Will Doreen get ‘disappeared’ by the Mind Police? You’ll need to be there to find out.

The show starts at 7.30pm but you can get there from 6.00pm for a picnic and wine. Bring your own low-backed chairs and warm clothing. High-backed chairs block the view of people sitting behind and won’t be permitted.